Find this article at:
go.ncsu.edu/readext?768424
— Written By Bailee Arnold 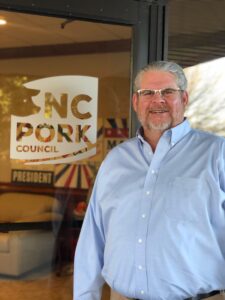 In September 2020, former NC Pork Council CEO Andy Curliss announced his departure from the council and now serves as director of external affairs for Smithfield Foods. But for the sake of progress, The NC Pork Council Board of Directors swiftly began the tedious process of appointing new leadership. This effort led to their November announcement that Roy Lee Lindsay would take over the role of CEO beginning in January 2021.

Lindsey, an Oklahoma native, served the Oklahoma Pork Council as Executive Director beginning in 1998. Prior to working with okPORK staff, his experience was as a County Extension agent for Oklahoma State Research and Extension.

NC State Extension – Swine welcomes Mr. Lindsey and we welcome the relationship we commit to continue building with the NC Pork Council!

Read more about this announcement and Mr. Lindsey on the NC Pork Council website.