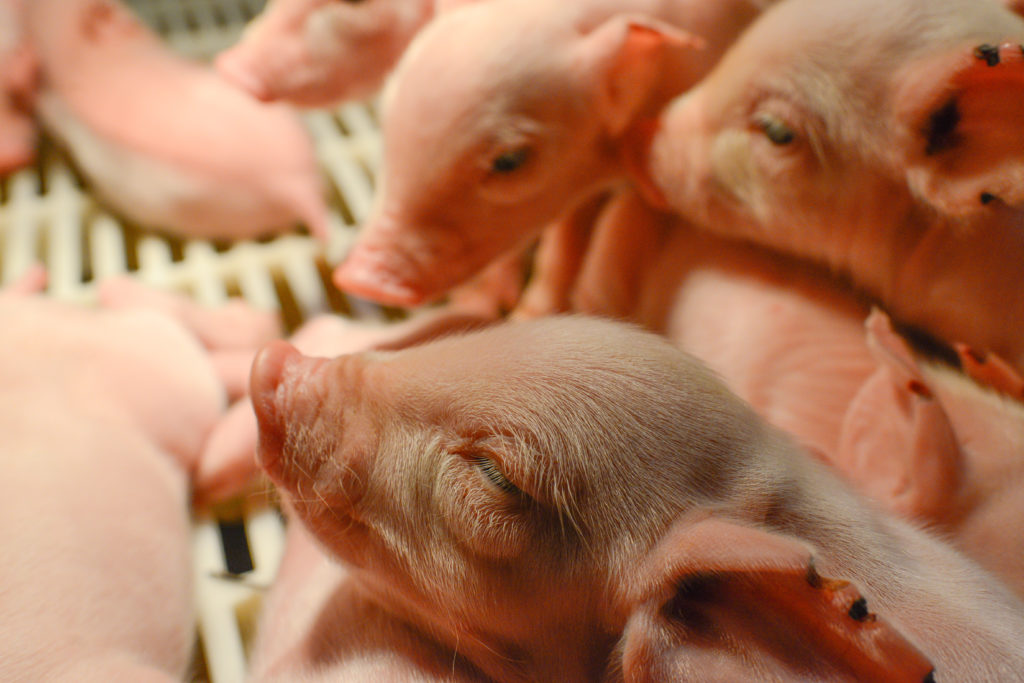 Throughput in relation to sow productivity can be defined as pounds of piglets weaned per sow. Using this definition, reproductive throughput would be a composite trait of number of piglets weaned and piglet weaning weight. Given pig producers are paid based on pounds marketed, weight weaned per sow appears to be a reasonable reproductive breeding objective for genetic suppliers. 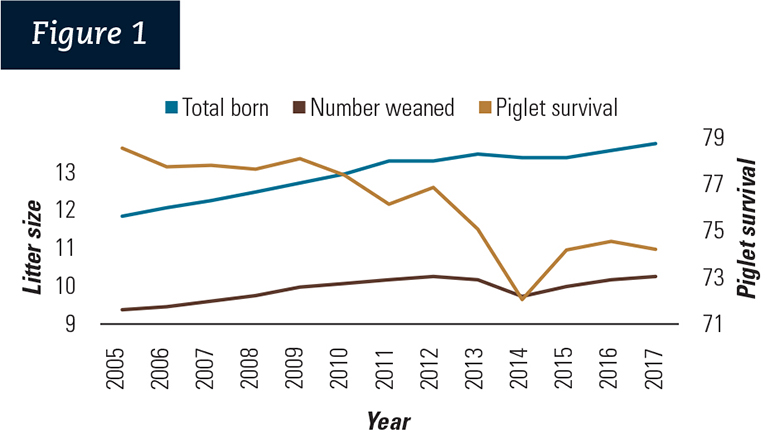 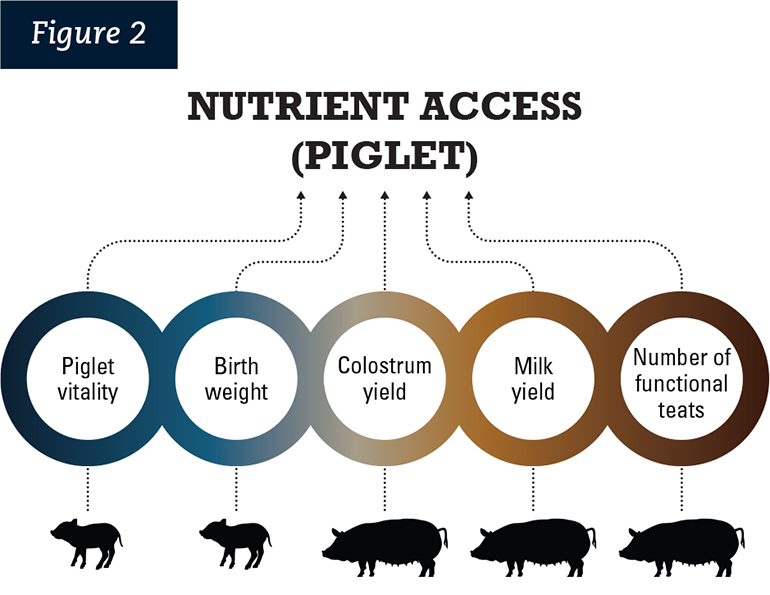 How can piglet quality be improved using genetics? As the saying goes, what is old is new again. Over 25 years ago, Neal and Irvin (1992) showed us how to improve piglet quality and litter size simultaneously by selecting for sow productivity index (SPI equals 6.5 multiplied by number born alive plus adjusted 21-day litter weight). After 10 generations of selection, the authors reported improvements in both litter size and piglet weaning weights. Improvements in SPI coincided with increases in number of fully formed fetuses, fetal survival and uterine weight. However, SPI did not impact ovulation rate. Therefore Neal and Irvin noted continued improvement in litter size, when selecting for SPI, may be limited by ovulation rate. Nonetheless, Neal and Irvin provided us a blueprint to work from on how to improve piglet throughput.

How essential are the number of functional teats on a sow to piglet throughput? The answer, perhaps, depends. As litter size continues to increase, production systems could utilize more nurse sows to ensure every piglet has adequate teat access. Yet I suspect in the United States we will add at least a few more functional teats to our sows in the near future. The importance of functional teats has been known for more than 50 years. Enfield and Rempel (1961) reported an increase in one functional teat improved the number weaned by 0.27 piglets per litter.

Can efficiency of selection for litter size be improved? Most piglet deaths occur within the first several days of birth. Therefore, geneticists in Denmark started selecting for number of piglets alive at Day 5 in lactation. This means piglets that do not survive between birth and Day 5 of lactation would be discounted. The Danes showed selecting for litter size at Day 5 versus litter size at birth continued to enhance litter size yet slowed the decline in piglet survival. Building upon the work of the Danish geneticists, Putz et al. (2015) collaborated with Smithfield Premium Genetics to identify alternative litter size traits in swine. Putz’s objective was to identify the best time in lactation to measure litter size in order to maximize genetic improvement for piglets weaned. Results from the study are shown in Figure 3. Efficiency of selection for litter size was relatively low the first several days of lactation and then plateaued near 90% to 95% the second and third weeks of lactation. Collectively, these results suggest improvement in reproductive throughput would be reduced when selecting for total number born or number born alive when compared to litter size measured later in lactation. Therefore geneticists should focus on litter size traits quantified later in lactation to help mitigate piglet mortality and maximize piglet throughput. 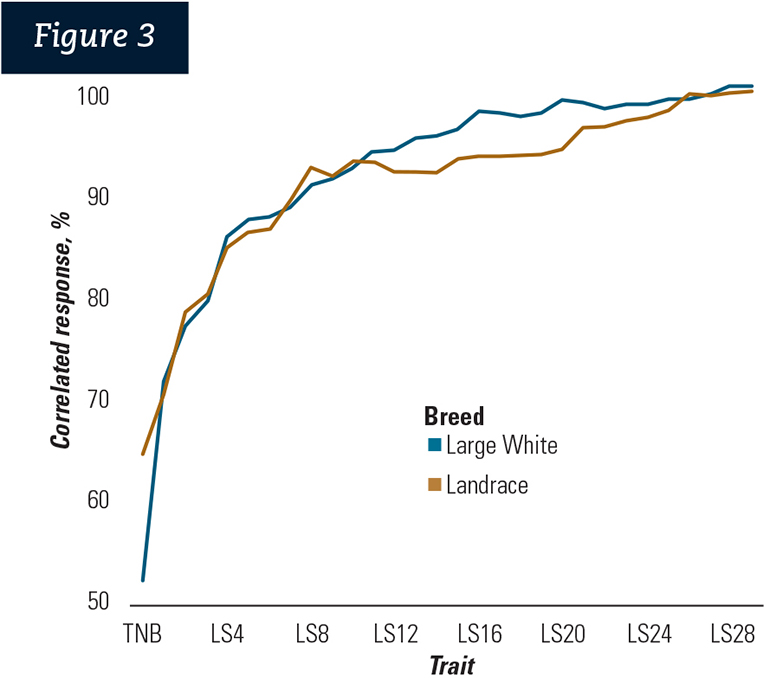 How should geneticists maximize piglet throughput? Perhaps by tweaking the equation from Neal and Irvin by including the traits litter weaning weight, number of functional teats and litter size at weaning (of the biological dam). Litter weaning weight encompasses components of birth weight, vitality, colostrum and milk production. Therefore litter weaning weight would serve as the main “piglet quality” trait. Including number of functional teats helps enhance litter size at weaning by improving piglet survival. Genetic nucleus herds generally cross-foster piglets at birth. Cross-fostering at the nucleus level has perhaps helped hide the importance of function teat count from geneticists. Enhancing litter size at weaning is the last piece to improving piglet throughput. Although measuring litter size at Day 5 or later in lactation may also be acceptable. Moving away from selection on total number born and number born alive will help mitigate piglet mortality.

In the future it will be important for geneticists to understand genetic associations between piglet quality traits and post-weaning mortality. Research has shown phenotypic correlations between piglet birth weight and weaning weight with post-weaning mortality. Yet genetic associations need to be evaluated. If favorable, genetic improvement for piglet quality would increase in importance.

Knauer is a North Carolina State University associate professor and Extension swine specialist. Questions can be sent to him. He would also like to acknowledge Smithfield Premium Genetics for its continued partnership with NC State University.
References