Find this article at:
go.ncsu.edu/readext?824310
— Written By Bailee Arnold

The digital images taken during the day while the facility lights were on (05:30 to 19:00) were used to determine piglet location using a custom algorithm developed in Python. Piglets were labeled as being either directly in the sow stall region (Rsow), in the creep area directly under the heat lamp (Rheated), or in any other area of the creep (Rcreep; Figure 1). In each image, the proportion of piglets in each region of the stall were counted by the computer algorithm. These values were averaged over the whole day to determine how frequently the piglets were in each region of the farrowing stall. Piglet location was recorded from the day of farrowing to three days post-farrowing, as well as days 7, 14, and 21 of lactation (Leonard et al., 2021). 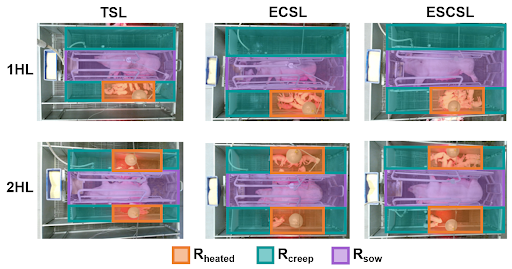 Figure 1. A custom camera system counted the proportion of piglets in each region of the farrowing stalls. Regions were labeled as the creep area directly under the heat lamp (Rheated), in any other part of the creep area (Rcreep), or in the sow crate area (Rsow). Experimental treatments were traditional stall layout (TSL), expanded creep stall layout (ECSL), and expanded sow and creep stall layout (ESCSL) and were tested with either one or two heat lamps (1HL or 2HL).

The amount of time piglets spent in each area of the stall was influenced by day of lactation, stall layout, and heat lamp treatment. Statistical interactions between day of lactation and stall layout as well as day of lactation and heat lamp treatment suggested that the way piglets utilized the spaces within the stall changed as they aged. On average, piglets with 2HL spent 4.8 hours more per day in the heated areas than piglets with 1HL (Figure 3). When piglets are under the heat lamp their energy expenditures for thermoregulation are reduced, as the heat lamp creates a warmer environment closer to thermoneutral for the piglets. However, regardless of the number of heat lamps, there were no differences in piglet mortality or average daily weight gain, suggesting that the second heat lamp does improve piglet welfare by better meeting thermal needs but does not create a measurable change in productivity. 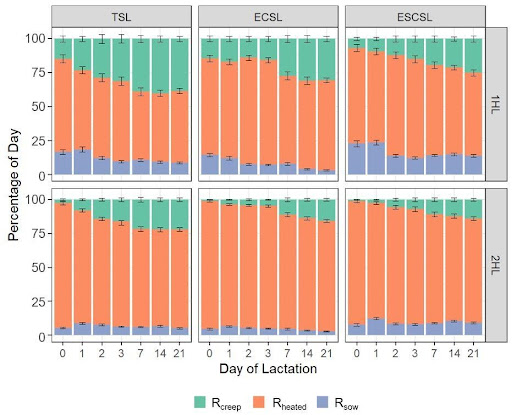 Figure 3. Percentage of time on each day of lactation piglets spent in each region of the farrowing stall by experimental treatment. Piglet location was identified as Rcreep when in the creep area, Rheated when directly under the heat lamp, or Rsow when in the sow crate region. Day of farrowing is indicated as Day of Lactation 0 and was designated from 00:00 to 23:59. Error bars indicate standard error. Experimental treatments were traditional stall layout (TSL), expanded creep stall layout (ECSL), and expanded sow and creep stall layout (ESCSL) and were tested with either one or two heat lamps (1HL or 2HL).

No relationships were found between time spent in each piglet location and pre-weaning mortality or overlay. However, the computer program did not track individual piglets and only recorded overall litter location information. There is likely a relationship between individual piglet location and mortality, in particular mortalities due to overlay, as the piglets must be in the sow region of the stall in order to be crushed by the sow.

Though the sow crate was centered in the farrowing stall to create two equal sized creep areas, the piglets did not use both sides of the creep equally. The piglets spent more time on the side of the creep with the sow’s udder, in both the 1HL and 2HL treatments. This demonstrates that piglets preferred udder access over heat lamp access, suggesting that the 2HL treatment could provide the additional needed warmth for neonatal piglets regardless of sow lying orientation. In the 1HL treatment, sows did not change their lying orientation behavior after the heat lamps were turned on. This indicates that the heat lamps at the heights and locations tested in this study do not cause direct thermal stress or discomfort for the sow.