Find this article at:
go.ncsu.edu/readext?889880
— Written By Bailee Arnold (2 months ago)

Reminiscing back to my family’s 50-head pure-line sow herd in the 1980s, I recall we on occasion had a sow that barely fit into the farrowing crate. I can remember a particularly large Landrace sow, as wide and as long as the crate, that appeared quite uncomfortable. She ended up laying on multiple piglets.
I’m sure some of you may share a similar story. Now fast forward to 2022. One would think we would have the optimal farrowing crate size figured out. Yet I’m not sure we do. There are around one million farrowing crates in the United States, and farrowing crates are a sizable capital expense. Yet studying differences between farrowing crates can be challenging.

When evaluating different farrowing crates, generally each design or size should be represented within the same room. To further complicate things, research for piglet survival requires hundreds of replicates per treatment to achieve adequate statistical power.

Only 670 sows are included in the dataset. Therefore, the data provides good anecdotal evidence but perhaps not a sufficient number of observations to make major decisions. Managers of the farm were confident they weaned fewer piglets in a certain area of the farm. Our data helps validate their inclination. 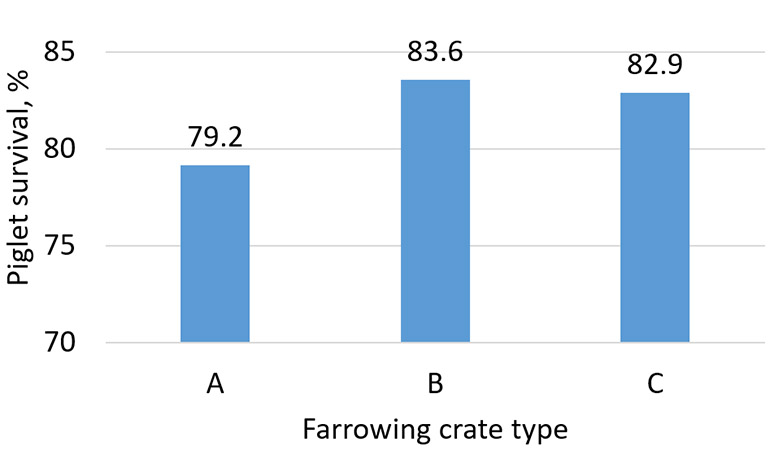 Figure 1: Piglet survival (n=670 sows) across three different farrowing crate sizes at a commercial farm in eastern North Carolina. Length of sow area for farrowing crate types A, B and C were 78, 84 and 83.25 inches, respectively. Average litter size for the data set was 13.9 piglets.

Longer sows wean fewer piglets?
While interactions between farrowing crate length with sow length and sow weight remain to be validated, evidence of sows being too long comes from a 2009 Pork Checkoff study. The study scored gilts for body length 1 (short) to 9 (long) at selection and followed the gilts through multiple parities. Piglet survival (extrapolated) for sows by body length is shown in Figure 2. Gilts that were longer at selection subsequently had reduced piglet survival as sows. 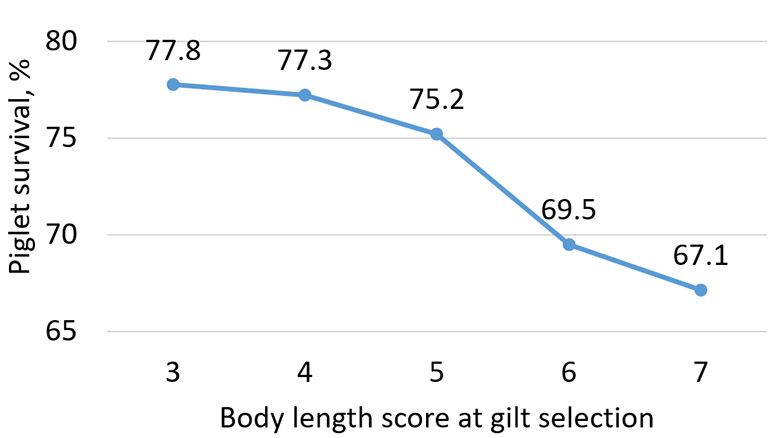 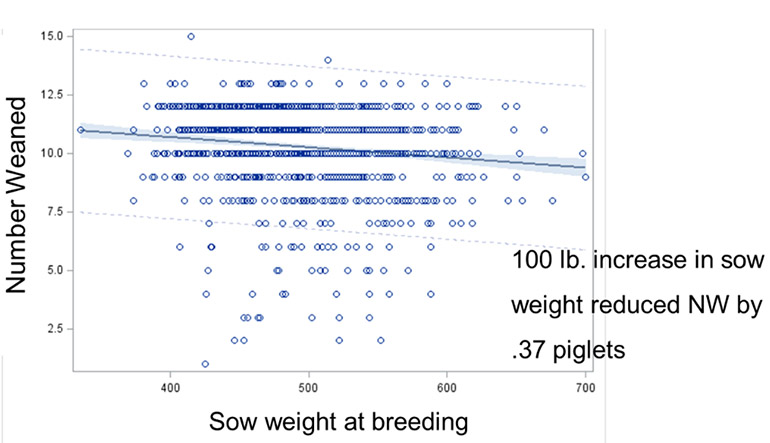 How do I keep my sows from becoming too big for my farrowing crates?

There are multiple strategies that can be utilized to prevent large sows. Please refer to past articles addressing strategies to reduce sow size through genetics, managing gilt weight at breeding and body condition management.

Perhaps the data presented in this article suggest more research is needed to determine optimal farrowing crate size in relation to reproductive throughput. Questions or comments can be sent to Mark Knauer.

Stalder, K.J. 2009. Association of compositional traits and structural soundness with the ability of commercial line of sows to complete parities two and three — NPB#06-031. National Pork Board Report.

Vande Pol, K. 2017. The impact of sow gestation housing system (individual vs. group) on the reproductive performance of sows across six parities and the effect of farrowing pen size on pre-weaning mortality. MS Thesis. Univ. of Illinois, Champaign.