Drinking Water has the Potential to Alter Swine Microbiome

Knowledge and understanding of the swine microbiome can provide insights into health and disease issues impacting pig production systems. It is an exciting time to be involved in microbiome research, as it is a relatively young field that is full of potential for discoveries and advancements.

Since the development of next-generation sequencing technologies, our understanding of the role of microbes in human and animal lives has expanded in some surprising ways. There has been evidence of microbes modifying insulin sensitivity, obesity and even behavioral factors such as anxiety. There is immense potential for translation of these human and lab animal microbiome discoveries into swine production.

The swine industry has recently shifted away from using antibiotics as growth promoters. Due to the reduction in antibiotics, the use of probiotics, microbes that have a positive influence on health, are making their way into more feed bins on many farms. However, there is still some “rebranding” that needs to be done for bacteria to completely shed their negative image.

In commercial environments, strict biosecurity protocols are employed to protect the animals from the introduction of pathogens from outside sources. Biosecurity also suppresses endemic disease transmission within the herd. Isolation of new animals, limitation of humans on the farm, hand washing, boot disinfection, all-in all-out production methods and intensive cleaning between groups ensure minimal pathogen transmission potential. However, this keeps the pigs in a relatively immune naïve state and may diminish potential beneficial microbial colonization that could support their immune development.

While some exposure to outside bacteria in pig production could be advantageous, the risk outweighs the benefits. Immune reactions induced by infections, especially inflammatory reactions, are energetically and metabolically expensive. This results in losses in production efficiency and compromised welfare for the animal. For this reason, commercial swine farms go to extreme lengths to ensure microbial exposure is kept to a minimum.

So where do the microbial communities that populate the pigs come from? The most common answers are from the diet and their interactions with other animals. One possibility that is less understood is drinking water. Drinking water quality is considered important to the health and productivity of pigs, and the classification of “quality” water includes more than just the mineral content.

A study conducted at North Carolina State University considered gestating and lactating sows from two different Nc State research farm locations, the Swine Education Unit and Tidewater Research Facility. Water samples were taken from each location and analyzed for potable water parameters. DNA from the sow and replicate water samples were extracted via column chromatography, sent to the University of Arkansas for 16S rRNA sequencing (Illumina MiSeq platform), and microbiota data were filtered and aligned using the QIIME2 2020.2 pipeline. Microbial abundance, diversity, and composition were compared between the locations.

There were no significant differences in alpha diversity indices between TW and SEU water, and the beta diversity differences may have been due to a high level of dispersion between the two sample types. However, there were compositional differences between SEU and TW water’s microbial communities as well as differences in potable water quality (though no water samples were outside of published acceptable ranges). Diarrhea causing Campylobacteria were more abundant in the TW water samples when compared to SEU water samples. That may be reflected in the oral, vaginal and rectal samples, as Campylobacteria were more abundant in these physiologic locations of the TW sows as compared to SEU sows as well. 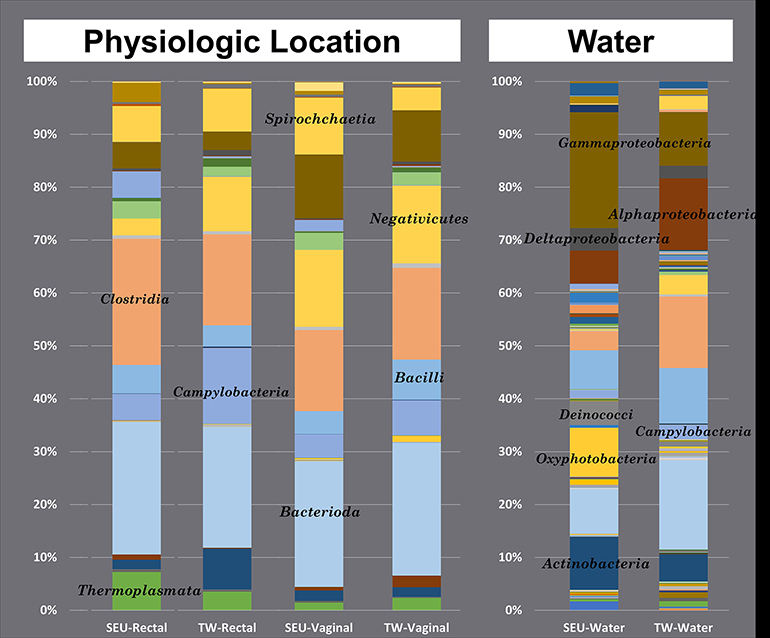 ANCOM analysis depicting the microbial composition of the rectal, vaginal and water samples from SEU and TW locations.

There is still more investigating to be done in this large data set, but preliminary examination suggests that oral, nasal, rectal and vaginal microbiomes were distinctly different in sows from different locations. Therefore, drinking water and location may influence the sow microbiome. Data has already been collected from a follow-up trial with multiple sites in a large integrated system that will also provide information on how drinking water can affect the sow microbiome and reproductive performance.

We still have a lot to learn about the role of microbiome in swine barns. Identifying patterns of change in microbial abundance and diversity present in the gut may be correlated to health and production parameters that would help producers, feed suppliers and veterinarians make more strategic decisions about management, feed additives and treatment options. Translation into livestock species is an important next step for the advancement of animal welfare, public health and producer viability.